Heartburn, also called acid reflux, acid indigestion, pyrosis or cardialgia is a term denoting a burning sensation in the upper central abdomen and the centre of the chest, with the pain sometimes rising from the chest to the neck, throat or angle of the jaw. Usually, this condition is the result of regurgitation of gastric acid into the oesophagus, or in medical terminology, gastric reflux. This condition is considered to be the major symptom of gastroesophageal reflux disease (or GERD), a rather common source of heartburn. However, in around 0.6% of the patients, acid indigestion is a symptom of ischemic heart disease which might require immediate medical attention and proper treatment.

Aside from being a symptom of these conditions, heartburn is experienced at least once by most people due to a number of different reasons which will be considered at a later point in the text. In these cases, heartburn isn’t indicative of any serious medical condition and it certainly isn’t dangerous in itself, but it’s very uncomfortable and can be a major disturbance in everyday life. This is why it is important to get familiar with the known causes of the so-called functional heartburn which isn’t related to any of the aforementioned conditions.

Heartburn and acid reflux occur once gastric acid finds the way into the oesophagus. Usually, this is not possible since oesophagus has a specialized muscle that closes the opening between it and the stomach, ensuring that the gases and fluids in the stomach never reach oesophagus. One can think of this natural mechanism as a one-way valve. However, this closing function can be impaired due to numerous reasons and affected by many different conditions. If that is the case, closing between stomach and oesophagus might be only partial so gastric acid can rise upwards and cause the unpleasant burning sensation associated with heartburn.

Impaired function of the closing function can be caused by many different factors, however, in healthy individuals, most common ones include:

Heartburn and acid reflux can be identified rather easily due to very uncomfortable and specific burning sensation in the throat and chest. However, for those experiencing this annoying condition for the first time, there might be some confusion since the distressing feeling in the chest can be misinterpreted as heart or lungs problem. The most common acid reflux symptoms include:

As mentioned, acid reflux can be caused not only by conditions such as GERD or ischemic heart disease but also by other more or less temporary causes such as consumption of certain foods and beverages or easily treatable conditions:

Some people also notice that heartburn is more pronounced when they lie down after lunch which is to be expected since in that position stomach acid can easily get into the oesophagus if the closing muscle’s function is impaired in any way. 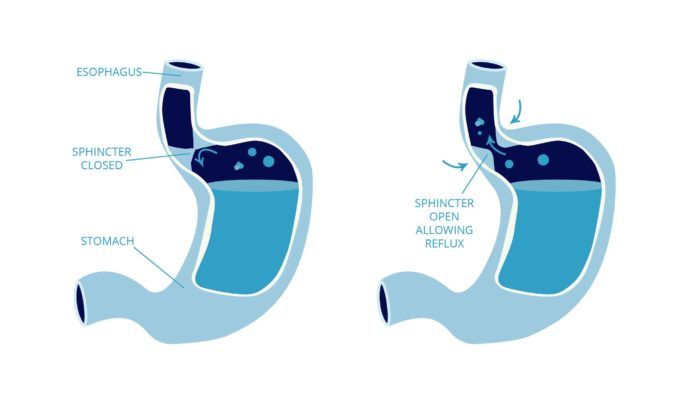 Acid reflux is especially common in women during pregnancy since enlarged uterus can push against the stomach, making it upset and squeezing the gastric acid into the oesophagus. What’s more, hormonal changes can also influence mucous membranes making them more relaxed, thus increasing the risk of heartburn. Since heartburn is a rather common condition during pregnancy, caused by normal changes in the women’s body, there is little you can do except try to eliminate all the other factors that might be contributing to it. Some commonly recommended acid reflux remedies and management methods include:

In cases where symptoms of acid reflux are only rarely experienced, usually, no additional measures are required. Usually, the cause is some of the common triggers such as eating too much, or eating spicy and strong food, so the symptoms will go away by themselves. However, if your heartburn becomes more common, it is advisable to visit the doctor in order to ensure that it is not a symptom of some more serious condition. If other causes are excluded, the only thing you can do is treat the symptoms and rely on acid reflux reliefs, such as:

If none of these suggestions work or are not enough to sufficiently alleviate the symptoms of excess stomach acid, heartburn medicines might be necessary. With different types of medications available on the market, it might be best to consult your doctor or pharmacist in order to get the proper treatment for your specific case.

Antacids are a specific category of acid reflux medicines that work by reducing the acidic value of the stomach acid by introducing bases into the system. In that way, the usual PH value of 1-2 will rise and the symptoms will be less pronounced. While this type of medication has a rather short duration, it can be rather successful in the symptomatic treatment of milder symptoms of acid reflux and heartburn.

Some drugs such as Lansoprazole, Losec or Zantac can decrease the production of stomach acid and help alleviate heartburn symptoms via that mechanism of action. When the so-called H2 receptors in the stomach are affected by histamine, more stomach acid is produced, so you can reduce the amount produced by blocking the H2 receptors. This can be a very effective treatment if the primary cause of heartburn is the excess of gastric acid.

The insides of the stomach are covered by a layer of mucus that protects the organ from the highly acidic gastric acid. If this mucus layer is damaged, the destructive impact of stomach acid can lead to the formation of stomach ulcers. Some medicines affect the body in such a way to increase mucus production in the stomach, thus not only reducing the risk of stomach ulcers but also mitigate heartburn and acid reflux symptoms.