Rosacea on face: What is it and how to treat its symptoms?

Inflamed acne-like buds and intense redness on the facial area can be symptoms of a skin condition called rosacea (ro-zay-sha). This condition is caused by an inflammation of the skin that can have many persistent and bothering symptoms.

In fact, many people do not know that they are suffering from this condition as it may become acute only after a number of years. Some will only have mild symptoms, while others are unfortunately very bothered by the inflammation of the skin. In the not-so-fortunate cases rosacea can develop into scalding on the edge of the eyelid and inflammation on the corner of the eye or in other words ocular rosacea. Whereas this condition is more common amongst women, the condition may also lead to the development of “potato nose” on men. This occurs because the sebaceous glands become inflamed and enlarged while there is a connective tissue formation.

If you are having any symptoms, remember that you are definitely not on your own as 45% of the world’s population1 suffers from it, including world-famous people such as Bill Clinton and the princess of Wales.2 Whereas it is more common on people with fair skin, it can also affect people with dark skin.

What is acne-rosacea and how do I know which one I have?

It is very difficult to tell the difference between rosacea and acne but in the majority of cases, you are able to tell the difference without seeking the help of a doctor. As acne is usually visible in the neck and jaw area as well as the face, rosacea is mainly positioned on the latter and it is rather a combination of symptoms than just bumps. In addition, younger people are more likely to develop acne as it is due to hormone fluctuations. Thus, if you are an adult it is more likely that you are not suffering from acne but rosacea instead. However, individuals in their 30s, 40s and even 50s can still have acne due to hormonal fluctuations during pregnancy, menopause or giving up or starting birth control pills. 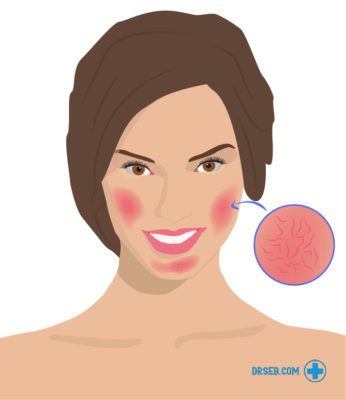 What causes rosacea and redness on face?

It is still unclear why exactly does rosacea occur and what gives it the characteristic of redness on the facial area. However, there are various factors that can trigger the conditions or make the symptoms worse. These include:

When getting to know which of the triggers are more likely to cause rosacea for you, it is easier to steer away from them and slowly lessen the negative effects of the condition.

The redness on the face is usually caused by broken capillaries that are called spider veins in more common terms. They are veins close to the skin that are affected by emotional or environmental influences. Therefore, these broken capillaries usually end up causing hot flushes or similar.

Rosacea symptoms and the development of the condition

Rosacea can cause various symptoms on the face. Many may not even be aware at first that they are suffering from this skin condition as some of its mild symptoms can easily be confused with other conditions.

Moreover, rosacea is categorized into 4 different stages, where the symptoms range from being mild to being very intense.

This is the stage before rosacea has really broken out. There may be outbreaks of heat and redness on the face at times. This can happen if you ingest strong and hot foods or are exposed to cold, heat or stress. The outbreaks can last for a number of years and many do not know they are, in fact, symptoms of rosacea. This is because these symptoms are often confused with other indicators.

When the condition breaks out, it is seen by the persistent redness on the cheeks and on the forehead. At the same time, the blood vessel may enlarge, and blood clots develop under the surface of skin.

During this stage, it is possible to experience inflamed buds and pimples on the skin of the face, in addition, to redness. It may remind you of acne, but you do not have blackheads.

The third stage can be similar to the before-mentioned stages expect the symptoms are usually more severe. There may also be swelling on the face. This is said to be the worst stage of the condition.

If you suffer from redness on the face due to the condition of rosacea, what you eat can play a vital role in the development of redness on the face. In many cases, you can reduce your symptoms by following the next dietary recommendations.

Although very tasty and aroma-rich flavours, spicy food is a no-go for most people who suffer from intense redness. Therefore, avoid adding chilli, cayenne or regular pepper, curry and other spices to your dishes. Instead of the strong spices, you can replace them with aromatic spices like fresh thyme, basil, turmeric, cumin or fresh ginger, lemon and lime.

A lot of people will find that their symptoms will worsen when consuming alcohol. Therefore, you should limit the intake of alcohol as much as possible. Perhaps there are some types of alcohol that cause worse symptoms than others? Record how the condition develops with different alcoholic beverages.

Like heat from the sun can cause redness, hot beverages such as tea, coffee and cocoa can also cause issues. If your symptoms get worse with these drinks, try to minimise the intake as far as possible. It can also be the caffeine from the coffee that causes problems. In this case, you should also keep away from other caffeinated drinks like coke or energy drinks.

Rosacea treatment solutions for redness on nose and face

As rosacea is a chronical condition, it can be difficult to cure. Thus, facial skin can be improved through various medical treatment options as well as with creams and gels and other natural treatment solutions. The best treatment option for you depends on how acute and severe your symptoms are. Find out more about the specific options below.

There are several completely natural treatment options available for rosacea that usually require some lifestyle changes. Some of these solutions include a healthy diet with plenty of proteins and organic vegetables and fruits as well as the usage of sunscreen at all times. It is also important to use organic skincare products and avoid stress in general.

If you have mild problems with redness, a cream or gel may suffice to give you relief from the symptoms. Some of the most common types of treatment are metronidazole creams, azelaic acid gel and doxycycline creams. If you suffer from a lot of redness, brimonidine gel may be used with one of the other treatment types. Another very popular treatment includes Rozex products, highly efficient gel and cream used for relief from rosacea symptoms.

Over the counter antibiotics

If the cream is not enough, antibiotics can also be a viable treatment option. Often times, tetracycline antibiotics are the most popular choice. These antibiotics can be used together with one of the above-mentioned rosacea creams or gels. When the prescription for the antibiotics is finished, it is still a good idea to continue with the cream or gel for the best results.

The laser treatment performed by a doctor is for the more severe cases of rosacea. It aims to remove the blood vessels that cause the redness. Thus, a patient might need up to four times of treatment before any visible changes occur. Laser treatment does not come without risks, a patient should keep an eye on any possible negative changes even after treatment.

If you have problems with severe redness of the face, possibly with inflamed buds and bloodshed, it is possible to buy treatment also safely online in the UK as it can often take a long time to get to book an appointment with a doctor. Thus, an online clinic can be an optimal solution. Via an online clinic, a doctor can assess whether you are suitable for treatment. If you are considered suitable, you will receive a prescription online and the treatment will be sent directly to you.

If you have tried lifestyle changes in all areas of your life, but still suffer from rosacea it could be the time to give a go to some of the other types of treatment solutions. Sometimes it is very difficult to avoid stress and uncertain life circumstances that can also have an effect on the body. No matter if you are experiencing mild or more severe symptoms it is good to remember that there are plenty of treatment options available. It is just up to you and in some cases your doctor, to find the optimal solution for you.