Asthma is a very common inflammatory lung disease, experienced by more than 5.4 million people in the UK alone. This staggering statistic shows that this condition affects around one in every eleven UK citizens, and maybe even more frightening is the fact that in 2016 alone, it has claimed more than 1.400 lives across the United Kingdom. This is why it comes as no surprise that the NHS is spending more than a billion pounds on fighting this disease.

While asthma is, in itself, not a serious condition, the sudden onsets of symptoms, called asthma attacks, can be potentially life-threatening and very often are. It is estimated that every day in the UK alone, three families experience the death of a loved one due to an asthma attack. However, the same estimates also suggest that two-thirds of those deaths were preventable.
Due to its long-term nature, this is not a condition that can be cured quickly, easily and with certainty, however, this does not mean that it cannot be effectively managed. With proper therapy, medication and avoidance of asthma attack triggers, symptoms can be mitigated and asthma attacks prevented before they have a chance to do any harm.

Asthma is a long-term inflammatory lung disease localized in the conducting zones of airways of the lungs, most notably bronchi and bronchioles which subsequently results in the tell-tale reversible narrowing of the airways, spasms of the surrounding smooth muscles and the inflammation of the mucous membranes. This narrowing is the root cause of almost all typical symptoms asthmatics experience including wheezing, shortness of breath and even asthma attacks.

As of now, scientists are still debating the causes of asthma, but the leading theories imply that this disease is caused by the combination of genetic and environmental factors (also known as triggers due to the fact that they can lead to exacerbation of symptoms). However, the medical community still isn’t certain as to why some siblings in the same family have asthma while others don’t. Also, this condition manifests in both sexes in more or less equal ratio, with most of the patients being children.

It is important to note that unlike other lung diseases, such as bronchitis, asthma is not caused by bacterial or fungal infection. Due to the unknown reason and a number of uncertainties related to its onset, most of the asthma medication currently available act by mitigating the symptoms of the disease, thus contributing to the effective management of the condition.

What are the symptoms?

While it may sound like a straightforward question, some might be shocked by the fact that this condition cannot be as easily identified by its symptoms as one might expect. This is due to the fact that different people can experience it differently. For some, the symptoms might be rare, up to the point where they are almost completely absent for most of the time, while for others, they can be a daily occurrence. Also, while for a number of patients, asthma symptoms are worse during the night or after exercising (exercise-induced asthma), for others these regularities can be absent.

However, some of the most common symptoms that occur in a large portion of asthmatics include:

Another way of identifying this condition is noticing the worsening of symptoms as a result of exposure to the so-called triggers. The most common of them include:

Is it asthma or not?

It is important to note that due to the variety of triggers and a broad array of symptoms which are not unique to this condition, asthma can often be mistaken for other conditions. Even the common cold can produce similar symptoms, or lead to the exacerbation of symptoms in asthmatics which makes this condition somewhat harder to identify without visiting the doctor.

This is why it is important to get familiar with symptoms and characteristics of other diseases which can lead to misidentification of the condition. The most common diseases that are mistaken for asthma are the ones that share the similar array of symptoms and are localized in the lungs. These include:

While bronchitis and allergies have almost the same symptoms as asthma, they are marked by additional ones (such as a runny nose and sneezing) and the absence of the typical asthmatic wheezing. However, in COPD patients, the wheezing is also present and this condition can easily create confusion. This is why, in order to get the right treatment, you should visit a doctor to make sure about the condition you’re struggling with.

An asthma attack is a severe exacerbation of symptoms, an episode of acute asthma after a period of stability marked by the tightening of muscles around the airways (bronchospasm), swelling and inflammation of the airways lining and production of thick mucus. 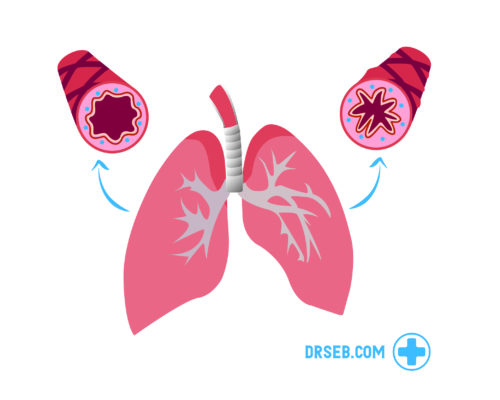 All these symptoms combined cause the tell-tale signs of an asthma attack:

Asthma attacks are not only extremely uncomfortable but can also be very dangerous if left untreated. While they usually pass within a few minutes to a couple of hours after the medication has been administered, or even pass on their own, an untreated asthma attack can lead to increasing tightening of the airways and lungs, up to a point when the wheezing will stop, but other symptoms will continue – this is sometimes called “a silent chest” and is the final signal that you need rapid medical attention.

Some people wrongfully interpret the sudden stop of wheezing as a sign of improvement, but that couldn’t be further from the truth – “a silent chest” is a symptom that appears once your lungs are so tight that there is not enough airflow to produce the characteristic sound, leading to the dangerous lack of oxygen in the brain and, subsequently, falling unconscious even death without immediate medical help.

If you experience an asthma attack and don’t have your medications with you, it is best to call the ambulance, no matter how mild an attack might seem. If the treatment doesn’t produce usual results, contact the emergency services immediately.

While there is no known cure for asthma, there are numerous treatments which can mitigate the symptoms and make the condition easier to deal with. With proper medication, it can be treated very successfully, up to a point where you don’t even notice the symptoms. If your symptoms are mild or rare, they can even be treated symptomatically, as they appear, for immediate easing. However, if you experience more severe symptoms, then additional treatment might be required, not only when symptoms appear. Today, there are many different and highly effective asthma medicines on the market such as Ventolin, Bricanyl or Singulair, to name just a few.

There are three different types of asthma medicines:

The most common form of asthma treatment certainly is an asthma inhaler. Inhaler has an instant and localized effect since active ingredients are administered directly into the bronchi, unlike tablets and other medicines that affect the whole body in order to treat the condition. This is probably the biggest advantage of an asthma inhaler and the reason behind its widespread use.

Currently, there are different types of inhalers, customized to different symptoms and severities of the condition. We can broadly organize them into three different categories:

Ventolin is one of the most commonly prescribed asthma inhalers, suitable both for preventive use and use during an asthma attack. On the other hand, products like Bricanyl are more suitable for prevention of attacks and treatment of mild asthma symptoms. However, both of them belong to the short-acting beta-2 stimulants, which means that the chemical type of an asthma medicine doesn’t determine its use.

I have asthma – What should I do now?

While the extremely uncomfortable symptoms of an asthma attack and the possibility of lethal outcome if left untreated certainly add to the anxiety related to this condition, the good news is – you can live a completely normal and healthy life, even if you have asthma!

With the increasing effectiveness of asthma medications and accumulating medical knowledge on the condition, there are many ways to mitigate the symptoms, even if you’ve been diagnosed with brittle asthma known for its recurrent and severe attacks. There is a number of things you can, and should do if you know you have asthma and need to keep it in check: