Diabetes, formerly known as sugar disease, is a disease caused when one has extremely high levels of sugar in the bloodstream for an extensive period of time. According to the World Health Organization: “Diabetes is a chronic disease that occurs either when the pancreas does not produce enough insulin or when the body cannot effectively use the insulin it produces. Insulin is a hormone that regulates blood sugar.” 1 The disease is known to affect both men and women of all age groups. Although the symptoms are generally the same, some symptoms are particular to men; for example erectile dysfunction and other urological complications.

If left untreated the disease can cause numerous complications that could lead to lifelong debilitating conditions or even death. The World Health Organization estimates that in 2015 some 1.6 million deaths were directly caused by diabetes. Diabetes in developed countries like in the UK have also proven to be a serious problem.

To understand what diabetes is one must understand how the body uses sugar and its interaction with insulin. When we eat, the body breaks down carbohydrates into glucose – a form of energy for the body. The glucose is then absorbed into the bloodstream to reach the cells in need of sugar. The pancreas, located in the stomach region, begins to produce the hormone insulin, which assists in transferring the glucose into the cells.

Diabetes inhibits the above process from taking place in the way it should.

Diabetes symptoms are generally the same in most cases, however we’ll get into more detail later on. 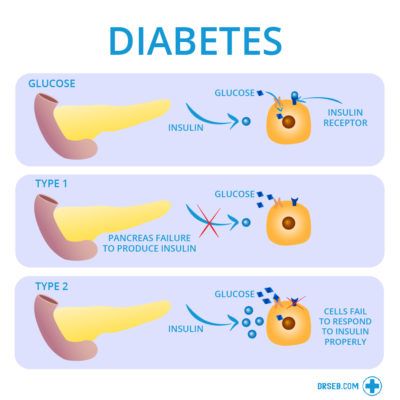 This type of diabetes is most common in children and young adults. In this case, no insulin is produced by the body, and without insulin, there is no glucose to drive energy to the cells. In addition, the immune system attacks part of its own pancreas. Type 1 Diabetes can, therefore, be classified as an ‘autoimmune’ illness, due to the immune system’s self-destructive tendency. Scientists have proven unable to definitively determine why this is the case, but the immune system mistakenly sees the insulin-producing cells in the pancreas as foreign and destroys them.

When there is too much sugar in the blood, the body tries to get rid of it. This is often done via urine. Patients with diabetes find the urge to urinate much more than average; a lot of extra liquid is being washed through the body, causing one to be more thirsty. In addition, the eyes can also become irritated, and there can be an onset of blurred vision. Other symptoms can include: localized itching eg. in the genitals, weight loss, dry mouth, fatigue, headaches, among others.

In the case of weight loss, the body begins to use fat deposits as a source of energy. The inability of the body’s natural energy – in the form of glucose – to reach the body’s cells causes this problem. Energy doesn’t get around the body as it should, thus causing fatigue.

Some scientists have claimed that Type 2 Diabetes may be due to genetic or environmental factors, however, most doctors put it down mainly to lifestyle. Unlike type 1, with type 2 the body may produce insulin, however, it either does not produce enough or there exists some degree of insulin resistance – meaning that the body doesn’t use insulin the way it should. This may be due to different factors.

One of the main reasons why there may be some insulin resistance is due to obesity or being overweight. This can cause problems with insulin production. In other cases, one’s body may be producing the required insulin but the pathways to the cells in need of glucose may be blocked by fat deposits.

Approximately 90% of all diabetes patients suffer from type 2 diabetes. Both genetics and lifestyle habits play a role. The vast majority of patients can get rid of many of the symptoms and get the disease under control by changing their lifestyle – eating healthy, exercising and eventually losing weight.

Symptoms of this type of diabetes are the same as the other, as noted before it includes: fatigue, localized itching, skin infections, increased thirst, blurred vision, among other symptoms.

It should be noted however that the symptoms may take some time to develop – even years. Having diabetes and not being aware is a serious problem. Early detection is critical for treating the disease effectively. If you’re overweight or have any near relative suffering from diabetes, it’s important to get screened – and stay in contact with your doctor.

Untreated diabetes can have serious consequences. Remaining untreated can cause, among other things: blood clots, arteriosclerosis, kidney disease, diabetic eye disease and nerve infection. It is critical to check if you suspect that you have the disease or have experienced some of the symptoms spoken of earlier.

If you’re found to have any type of diabetes, your doctor would make you aware of the degree of your situation and the treatment required. In all cases, a healthy lifestyle is the first recommendation.

If you suffer from type 1, then insulin supplementation is required. In this case, lifelong insulin treatment is certainly what any doctor would recommend, as the body itself no longer produces insulin. You must learn to measure your own blood sugar and learn the symptoms associated with low and high blood sugar levels. In addition, one must learn to perform injections.

In some cases, patients with type 2 diabetes would also need insulin treatment.

For this type of diabetes, there are numerous different types of treatments, depending on how advanced the disease may be. For example:

One of the most common treatments used is Metformin. Metformin comes in the form of tablets taken orally and is used to help lower blood sugar by, for example: making the cells more sensitive to insulin’s action in the body.

Particularly in type 2 diabetes, lifestyle changes are extremely important. Some of the changes you can take advantage of are the following: